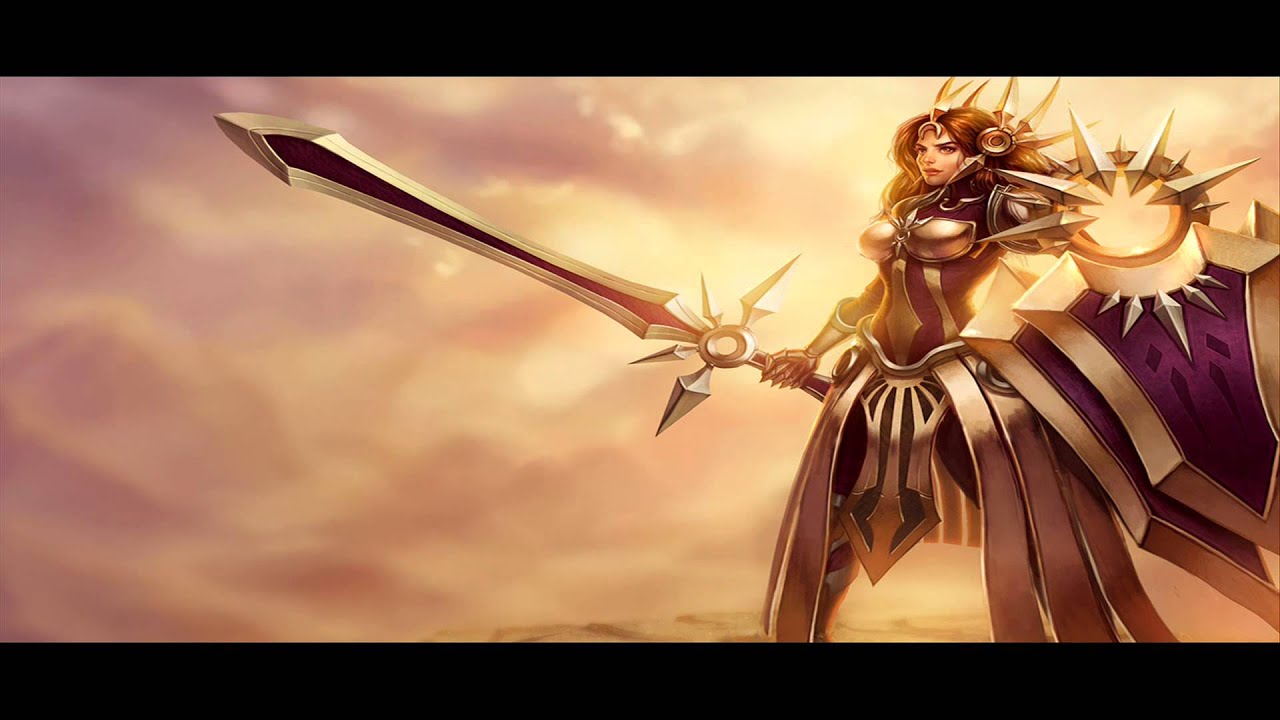 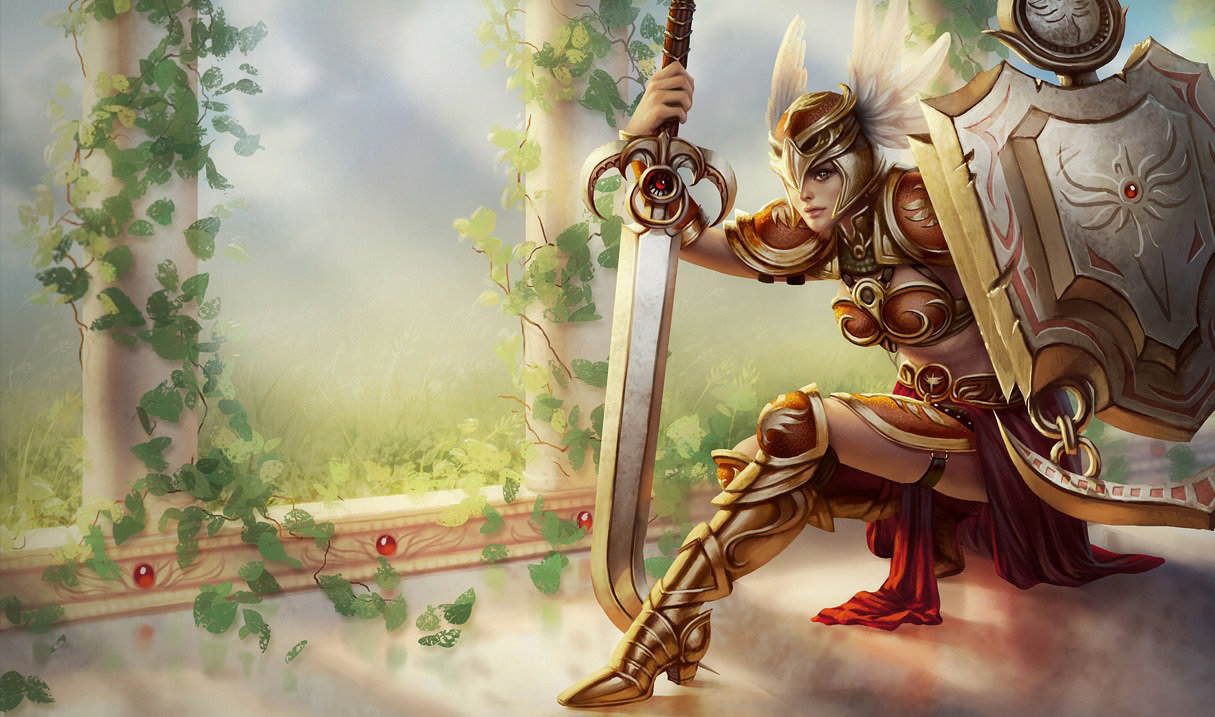 Leona and Atreus fought beneath the blazing sun, and though both bled freely from dozens of wounds, neither could land a deathblow. As the sun dipped toward the horizon, an elder of the Solari marched into the Rakkor camp with three gold-armored warriors and called a halt to the duel.

The Solari were adherents of a martial faith built around sun worship, whose unforgiving tenets dictated life around and upon Mount Targon.

The elder had been led to the Rakkor by dreams and an ancient Solari prophecy that spoke of a warrior whose fire burned brighter than the sun, a daughter of Targon who would bring unity to the celestial realm.

The elder believed Leona was that daughter and upon learning the nature of her transgression, his belief was only strengthened. The tribal seers warned against interfering in the duel, but the elder was adamant; Leona must come with him and become one of the Solari, to be fully instructed in their beliefs.

The Rakkor were fiercely independent, but even they paid heed to the holy decrees of the Solari. The warriors lifted Leona from the pit and bore her wounded body from the Rakkor toward her new life.

The Solari temple was a towering citadel on the eastern slopes of Mount Targon, a glittering spire of gold-veined marble and polished granite.

Here, Leona learned the ways of the sacred order — how they worshipped the sun as the source of all life and rejected all other forms of light as false.

Leona trained every day with the warrior order of the Solari, the Ra-Horak - a Rakkor title which means Followers of the Horizon - honing her already fearsome skills with a blade into something sublime.

In time, Leona rose to command the Ra-Horak, becoming known around Mount Targon as a just, devoted and, some might say, zealous servant of the Sun.

Her path changed forever when she was called to escort a young member of the Solari to the heart of the temple. Her name was Diana, a troublemaker well known to Leona from the exasperated woes of the temple elders.

Diana had gone missing months before, but now returned, clad in a suit of pale armor that glinted with strange silver light. Diana claimed to bring great news, revelations that would shake the Solari to its foundations, but which she would only reveal to the temple elders.

Presented to the elders, Diana spoke of the Lunari, an ancient and proscribed faith that venerated the moon, and how all the truths the Solari clung to were incomplete.

She described a realm beyond the mountaintop, a place where the sun and moon were not enemies, where new truths could show them fresh ways to look at the world.

White flames surged in a hurricane of cold lightning and blasted Leona from the chamber. When she regained consciousness, she found Diana gone and the Solari leaderless.

As its remaining members struggled to come to terms with this attack on their most sacred space, Leona knew there was only one path open to her.

She would hunt down and destroy the heretic Diana for the murder of the Solari elders. Leona did not falter, climbing through a landscape that seemed strange and unfamiliar, as though she followed paths that had never existed until this moment.

The sun and moon passed overhead in a blur, as if many days and nights passed with her every breath. She neither stopped to eat nor drink, letting fury sustain her beyond what should have been humanly possible.

Eventually Leona reached the top of the mountain, breathless, exhausted, starved and stripped of all thought save punishing Diana.

There, sitting on a rock at the top of the mountain was the same golden-skinned boy whose life she had spared as a child. Behind him, the sky burned with blazing light, a borealis of impossible colors and the suggestion of a majestic city of gold and silver.

In its fluted towers and glittering minarets, Leona saw how the Solari temple echoed its magnificence and fell to her knees in rapture.

He held out his hand and offered to show her miracles and to know the minds of gods. Leona had never turned from anything in her life.

A column of searing illumination stabbed down from the heavens and engulfed Leona. She felt an awesome presence filling her limbs with terrifying power and forgotten knowledge from the earliest epochs of the world.

Her armor and weapons burned to ash in the cosmic fire and were in turn reborn as ornate warplate, a shield of sunlight wrought in gold and a sword of chained dawnlight.

The warrior who came down the mountain looked the same as the one who had climbed it, but inside Leona was much changed.

She still had her memories and thoughts, was still master of her own flesh, but a sliver of something vast and inhuman had chosen her to be its mortal vessel.

It gifted her with incredible powers and awful knowledge that haunted her eyes and weighed heavily upon her soul; knowledge she could only ever share with one person.

Their steps were swift as they entered the settlement at the foot of the mountain. These were men who had fought as brothers for years, who lived in the heartbeat between life and death.

A warrior in battered scale armor and bearing a heavy-bladed greatsword over his shoulder led them. Beneath his dragon-helm, his face was bearded and raw, burned by a lifetime of war-making under a harsher sun than this.

The previous settlements had been easily overcome; little challenge for men weaned on battle. The spoils were few and far between, but in this strange land, a man took what he could get.

He grinned as he saw it was a woman. Finally, something worth plundering. Light enflamed her, and the grin fell from his face as he stepped closer and saw she was clad in ornate warplate.

Auburn hair spilled from a golden circlet and sunlight glinted from her heavy shield and long-bladed sword. More warriors emerged from the street, taking their place to either side of the woman, each gold-armored and bearing a long spear.

Leona lifted her sword as the twelve warriors of the Ra-Horak formed a wedge with her at their center. Six to either side, they swung their shields and hammered them down as one.

Leona made a quarter turn and locked her own shield into place at the apex. She flexed her fingers on the leather-wound grip of her sword, feeling the surge-tide of power within her.

A coiled fire that ached to be released. Leona held it within her, letting it ease into her flesh. Embers flecked her eyes and her heart pounded in her chest.

The being she had joined with atop the mountain longed to burn these men with its cleansing fire. Part of Leona wanted to give the power in her free reign; wanted to scorch these men to smoldering bone and ash.

Their attacks had killed scores of people who called the lands around Mount Targon home. They had defiled the sacred places of the Solari, toppling sacred sun stones and polluting the mountain springs with their excretions.

Dragon-helm laughed and swung his greatsword from his shoulders as his men moved away from him. To fight with such a huge weapon and keep it in constant motion needed space.

Enemies in the center of the area are stunned, while enemies on the outside are slowed. Champion Mastery OP.

E Zenith Blade Leona projects a solar image of her sword, dealing magic damage to all enemies in a line. 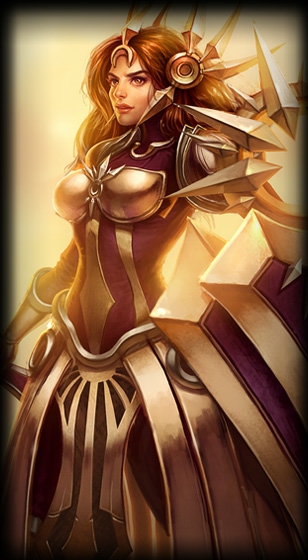